Find tools and information to help you explore the opportunities futures trading can offer.

Search our directory for a broker that fits your needs.

THE SOURCE FOR HISTORICAL DATA

Get our latest economic research delivered to your email inbox.

Read more about what drives global markets from our Managing Director and Chief Economist, Bluford Putnam

Get a veteran institutional trader’s insights on how to trade opportunities using options on futures.

Learn why traders use futures, how to trade futures, and what steps you should take to get started.
Selling Futures for Protection Against Falling Prices
You completed this course.Get Completion Certificate

Those involved in producing or selling grain and oilseed products are aware of the risks they face from a potential decline in prices. Farmers, merchandisers, grain elevators and exporters, who are concerned about the impact that a price decrease could have on their business, are constantly seeking ways to mitigate this risk and protect their bottom line.

Fortunately, due to the availability of CME Group grain and oilseed futures and options, there are many strategies you can employ. This module will discuss selling futures as a hedge against declining prices, including how changes in the basis could affect the final outcome.

For the purpose of our discussion, say that the seller is a soybean producer, it is May and he has just planted his crop. Due to uncertain weather patterns, the producer is concerned that soybean prices could decline before he harvests his crop in October. The basis in his area in mid-October is typically 10 cents under the November futures price, which is currently trading at $8.85 per bushel.

The producer knows he will be profitable if he sells his soybean at the current futures price, so he decides to hedge his crop by selling, or going short, November soybean futures.

By hedging with November Soybean futures, he locks in an expected selling price of $8.75, which is the November futures price of $8.85 price minus the expected basis of 10 under.

Look at what happens to his short futures hedge if soybean prices actually do decline, or if they increase.

Assume that in October, the November Soybean futures price declines to $8.50 and the basis is 10 under as expected. This means that the cash price for soybeans in October is $8.40, which is 35 cents lower than cash soybean price the producer was anticipating back in May.

If the price for soybeans goes up rather than down, the producer will still receive $8.75 per bushel for his soybeans. 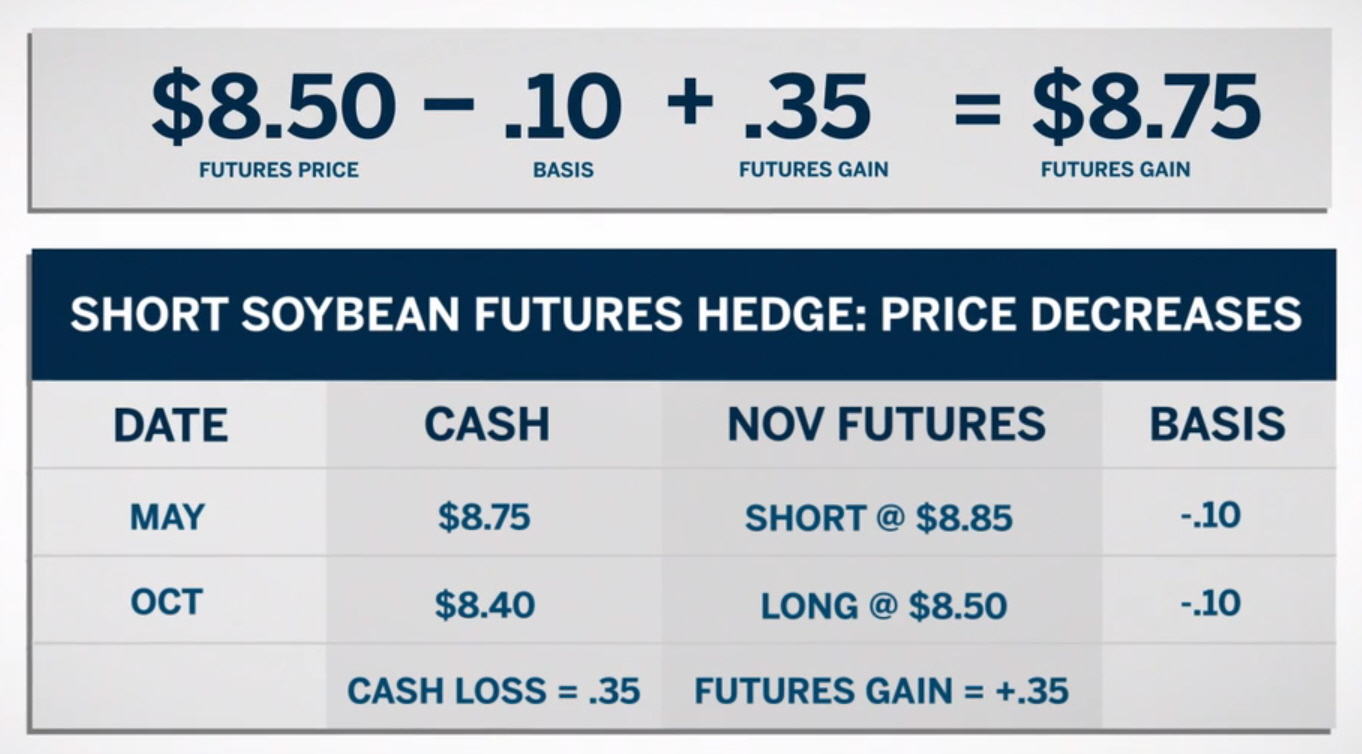 Under this scenario, where hedging with futures provided protection against falling prices, but it did not allow him to take advantage of a higher price, it appears on the surface that hedging was a losing proposition for the producer.

However, remember his original goal at the beginning of this process: to lock in a selling price of $8.75 for his soybeans. By hedging with futures, he accomplished what he intended when making the decision to hedge. Relinquishing the chance at a higher price in exchange for securing price protection, knowing that the price could just as easily have declined, is a trade-off that a short futures hedger is willing to make. 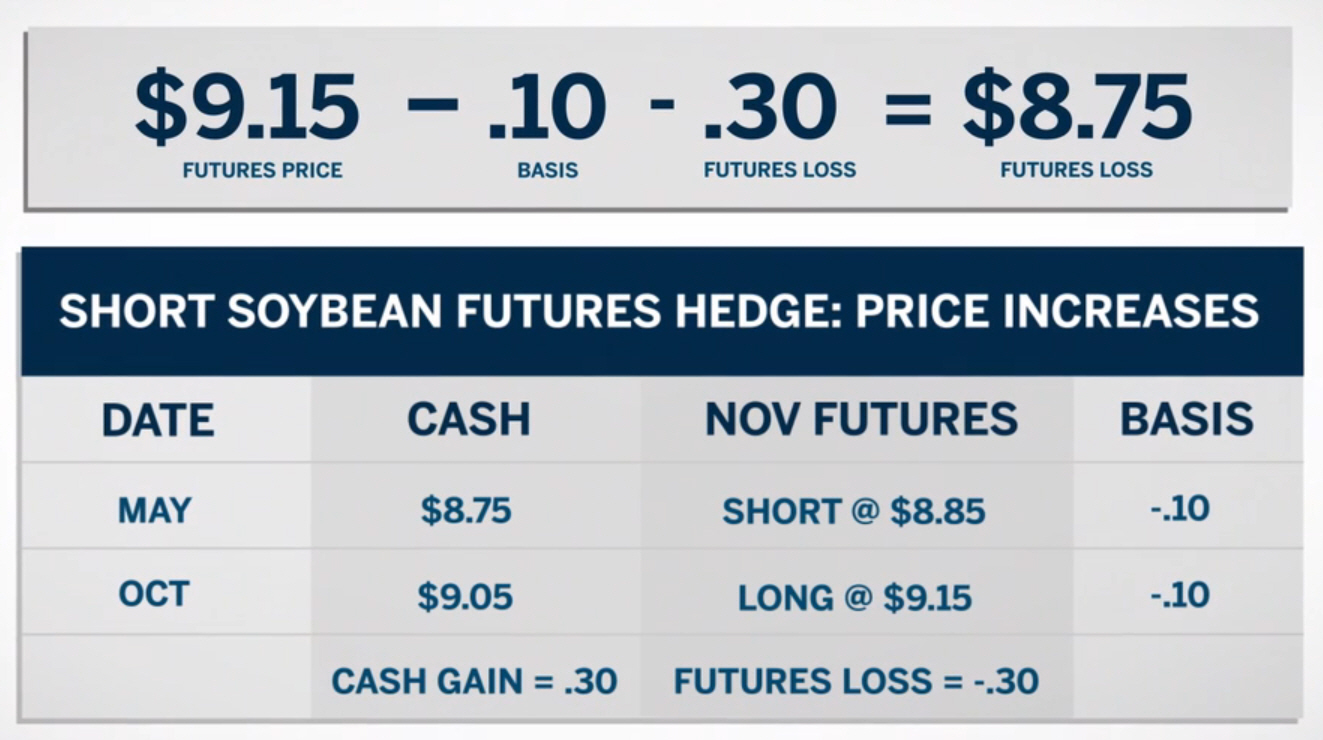 The producer’s actual sell price will be affected by what happens to the basis by the time he harvests and sells his soybeans. Keep in mind that a short hedger will benefit from a strengthening basis, or a basis that becomes less negative or more positive.

A basis that is stronger than expected could increase a short hedger’s net selling price even in the face of a price decline. In the earlier scenario, soybeans fell to $8.50. If the basis strengthens from 10 under to 5 under for example, his net sell price would be $8.80, which is the November futures price of $8.50, minus the basis of 5 under, plus the futures gain of 35 cents.

No one can predict the future, but hedgers can take steps to manage it. Selling grain and oilseed futures allows those who need protection against falling prices to have peace of mind knowing that they have taken steps to manage the risk involved in producing or selling these commodities for their operations.

CME Group is the world's leading and most diverse derivatives marketplace. The company is comprised of four Designated Contract Markets (DCMs).
Further information on each exchange's rules and product listings can be found by clicking on the links to CME, CBOT, NYMEX and COMEX.